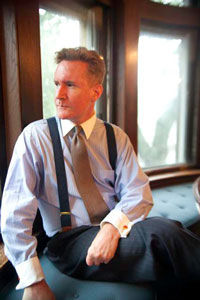 Attorney Jerrold Neeff was fresh out of BU Law when he received a phone call from a client claiming that he was not only Madonna’s former bodyguard and lover, but that he also had a sex video featuring Madonna that he wanted to sell. Neeff confirmed the details and flew that same day to Manhattan to meet with the potential client, and yes, there was indeed such a video.

“The next thing I knew, I was on the phone with a businessman in Thailand who had produced the infamous Pamela [Anderson]-Tommy Lee sex video, and who now wanted to buy the Madonna video,” recalled Neeff, who was just launching his new practice, the Bostonian Law Group, at the time. The businessman in Thailand was willing to pay millions of dollars for the video and to distribute it for a one-time fee online. “Suddenly, we were flooded with phone calls from every tabloid in England and invited to appear on every talk show in the U.S., including Howard Stern. It was my first real IP media case and a bit of trial by fire, to say the least.”

Neeff knew that he could earn millions of dollars from the video, as well as the kind of invaluable publicity that has boosted many attorneys’ careers. “We determined that the market value of the video at the time was somewhere between 5 and 10 million dollars and that we were to receive a significant fee,” he recalled. “We had to make a quick and steadfast decision as to whether our client could sell this video and evaluate the terribly gray perimeters of IP law one so constantly finds in addition to the ethical issues surrounding our representation.”

But then he took a harder look at the complications in the case.

“Our client noted that his girlfriend at the time, Madonna, had systematically sent provocative keepsakes to him while on the road and that this time, she had chosen an actual sex video. We wondered who in fact had produced the video, how our client had acquired it, whether it really portrayed Madonna, and whether the white powder shown being snorted in the video was cocaine or simply a depiction. In short, we found ourselves in a quagmire of IP issues—copyright, rights to publicity, invasion of privacy and defamation. I advised that he could have some serious liability, and Madonna’s lawyers would crush him and file potentially millions of dollars in damages against him—and potentially against me.”

He ended up refusing the case. The video never surfaced, to his knowledge, and his client moved to Thailand.

“I could have made a lot of money; it could have been easily sold, and I could have walked away from it all,” he said. “But it seemed like a bad way to start my career.”

Still, it gave him an excellent education in entertainment law and IP, a far different career than the one he began—handling class-action suits related to handguns, tobacco, airlines and computer keyboards. Today, he has become the go-to person not only for the entertainment industry but also for online defamation. His clients are based here and in Europe, Asia, Canada and the Middle East. He also teaches entertainment law at BU Law.

It has only been about 15 years since the average person started surfing Web sites. By mid-2009, an estimated 1.7 billion people were online. “It’s become very common today to see these issues arise online, with YouTube, MySpace, Facebook, Second Life and the myriad of other popular Web sites producing these nebulous yet provocative legal issues in the wonderful, wide open world of IP,” Neeff said. “The trends continue to grow virtually every year, both literally and figuratively—online defamation, improper uses of provocative images, blatant copyright infringement, click-attacking and many other types of technological subterfuge and espionage so prevalently used in our evolving virtual world.”

He represents clients—famous and not so famous—in those areas, as well as invasion of privacy, violations of the right to publicity, accusations of inappropriate and/or excessive use of the Internet in the workplace, Internet fraud and identity theft issues and legalities involving online gambling sites. He has represented some famous clients in the music and film industry, handling cases involving TV shows such as “The Apprentice” and “Fear Factor,” and movies such as “Underworld,” “Konstantine,” “Down With Love” and “White Chicks,” which, in turn, earned Neeff media attention, making him a bit of a celebrity. He has appeared on “Celebrity Justice,” “Extra TV,” CN8’s “Nightbeat” with Barry Nolan, and WHDH-TV. He has been quoted in various media including the Wall Street Journal, CNN, News of the World, the London Times, the London Daily Mirror, “E! Entertainment,” “Court TV,” Playboy Magazine, Star Magazine, People Magazine, the New York Daily News, Lawyers Weekly USA, the Boston Business Journal and the Boston Herald.

But online defamation cases aren’t limited to celebrities—his clients also include doctors, lawyers, business professionals and even college students. In Cronin v. Doe, a case currently pending before the federal District Court of Massachusetts, Neeff’s client, James Cronin, was selling used off-road recreational vehicles. A few days after Cronin opened his business, someone anonymously posted claims on PissedConsumer.com alleging that he did not obtain proper licenses and that he was a fraud. When customers Googled the business, these false accusations appeared.

Cronin received many customer inquiries about the posting and wrote several letters to the Web site owners requesting the identity of the party publishing the comments and the removal of the postings. He received no response and consulted Neeff.

Most often, Neeff resorts to submitting subpoenas to obtain information identifying the anonymous posters, although sometimes a cease-and-desist letter has proven to be sufficient. However, referring to the Cronin case, Neeff said, “We will probably have to go the distance on this one.” In the meantime, Cronin had no choice but to shut down his business.

“It’s very difficult to have any such postings removed due to the Communications Decency Act [CDA],” said Neeff. “The CDA, which was originally enacted to regulate pornography on the Internet, provides a great deal of insulation from liability to any service provider, leaving the victim with very little recourse absent litigation. In the case of Google placements, the results of using the engine as a weapon can be profound.”

For example, Neeff said he is representing a health counselor accused of being a fraud, a child molester and a devil worshipper; and a doctor accused of sexually abusing his former patients. “Anyone who has access to a computer has the ability to inflict this type of damage to the well-being of anyone for any reason,” he added.

“While we cannot understand the motivation [of online defamation], the damage is irreparable and can cause any normal person a tremendous amount of stress,” he said. “These people are nothing more than anonymous assassins with much less than the dignity of a Jonathan Swift. Clearly, legislation is well behind the alacrity of technological innovation and will truly need to be examined going forward.”

With his entertainment law class, Neeff hopes he can pass on some of what he has learned about online defamation to the social network-savvy students at BU Law. “I love to discuss these hard-hitting legal issues with my students,” he said. “I also really enjoy helping them to focus on the practical aspects of lawyering—particularly learning how to handle ethical issues and to develop meaningful relationships with your clients.”

McGee v. Andre Benjamin “3000,” Turner Broadcasting Systems, et. al. (2009): Neeff recently procured a confidentiality settlement on behalf of his client against Turner Broadcasting Systems, The Cartoon Network and Andre Benjamin (aka Andre 3000 of Outkast). A Boston man said that Benjamin’s “Class of 3000″ animated series produced on the Cartoon Network was a little too much like his would-be show “The Music Factory of the ’90’s.” Neeff argued copyright infringement, breach of contract and misappropriation of trade secrets.

A Slice of Pie Productions v. Wayans Bros., et. al. (2006): Neeff represented three screenwriters for the misappropriation and infringement of their screenplay “Johnny Bronx,” which was was allegedly largely used later in the movie “White Chicks,” starring Marlon and Shawn Wayans. He argued the landmark decision in which the court agreed that an idea submission claim could survive even where there was no privity between the parties in the submission process.

Hit-City Records v. EA Games, et. al. (2006): Neeff recently obtained a confidential settlement against EA Games for the alleged unauthorized use of his client’s musical composition on the video game “Fight Night II,” one of the most successful sports video games, sales-wise, in history.

Doe v. Lim (Unpublished and Impounded Opinion, 2006): A third party had wrongfully obtained nude photographs of Neeff’s client and published them without authorization on MySpace.com. Neeff successfully had the photographs removed from the site and had the decision impounded to protect the identity of his client.

Albright v. Morton (2006): Neeff crossed paths again with Madonna, arguing the seminal decision on defamation before the U.S. Court of Appeals. In the case, he represented another Madonna former body guard and lover who was imputed to be gay in Andrew Morton’s unauthorized biography Madonna. This accusation was republished, allegedly wrongfully, in People Magazine and The News of the World. In an interesting turn in the case, despite all prior case precedent, US District Judge Nancy Gertner (Massachusetts) ruled that stating that someone is homosexual does not libel or slander them, saying that “a finding that such a statement is defamatory requires this court to legitimize the prejudice and bigotry that for too long have plagued the homosexual community.”

EMC Corp. v. Techtime Inc. (2005): Neeff defended a small company composed of former employees of EMC Corp. against allegations of trade secret theft and the violation of non-compete agreements. After winning several discovery motions in a vigorous defense, the matter was settled confidentially.

Jones v. Vin di Bona Productions (2004): Neeff obtained restraining orders and settlements for the wrongful use of his client’s image, including a settlement against “America’s Funniest Home Videos” for the alleged unauthorized use of his client’s image. In the decade old video, someone shaved a smiley face on his chest while he was asleep. He never approved its airing; he was not only embarrassed but also furious that the clip ended up on a compilation DVD and on the Internet. “Seems like an awful lot of money is being made off others’ public humiliation,” Neeff told the Boston Herald.

Davidson v. FMR Corp. (2004): A software developer sued his employer, Fidelity, for $100 million for copyright infringement in unlawfully using software he had developed. Neeff said it was a case of a small inventor having his creation stolen by a huge corporation. The Boston Business Journal referred to it as a case of “David vs. Goliath.”

Fantasia.net v. Homec.com (2004): Neeff received a permanent injunction against a California-based company engaged in copyright infringement and misappropriation of trade secrets obtained by copying the content, graphics and codes of his client’s web sites and restrained the company from engaging in any similar business for five years.